How To Make A Homemade Necklace That’s Truly Original

Here’s how to make a homemade necklace, it’s inexpensive compared to buying one & enables you to exercise your imagination to create something truly original.

savvyhomemade.com is reader-supported, if you buy via the links here we may earn a small affiliate commission at no cost to you, please read our full affiliate disclosure here.

Let’s take a look at how to make a homemade necklace, it’s an inexpensive homemade gift compared to buying jewelry and enables you to exercise your imagination to create something truly original.

You can choose from a myriad of beads and pendants to create a very personal and unique piece of homemade jewelry.

But before you try to make one of my homemade necklaces take some time to run through the basics of how to make a necklace below and use it as a reference guide for any necklace project to take on.

Some jewelry findings can be quite small and it’s sometimes difficult to see how a technique has been created. For this reason, I’ve given a mixture of real photos along with some drawings to make the technique more visible.

Jewelry making pendants may be fixed on your threads in several ways. Many pendants have a loop at the top and some contain a hole going through them either front to back or side to side. Some even have a hole running through from top to bottom and they’re know as drops.

There’s a variety of ways for fixing your pendant to threads of any thickness. With large holed pendants the thread itself can be looped in such a way that the pendant hangs correctly without needing a finding.

On pendants with small holes or loops running from front to back, use either a jump ring or a bail and loop. The thread can pass through this, leaving the pendant hanging properly so that it rests flat upon the neck.

If the hole is fairly deep set or runs from side to side, 2 jump rings may be used for the pendant to hang properly.

Use This Method To Open And Close Jump Rings

To open a jump ring it’s advisable to use two pairs of jewelry pliers. Don’t attempt to open a jump ring by pulling the ends apart, because this may distort the shape and it’ll become hard to get it back into a perfect circle.

If using a ‘bail and loop’ on your homemade necklace, make sure that the size of the loop is large enough for the thread. Squeeze the bail firmly shut with the prongs through each side of the hole on the pendant.

In the event that the opening through the drop (from top to bottom) is too big for the pinhead to hold it, you will need a cup or small bead at the bottom to prevent the pin from falling through.

With large holed pendants the thread itself can be looped in such a way that the pendant hangs correctly without needing a finding.

A crimp bead can be used to attach a finding – Often as a jump ring to the end of a length of bead stringing wire, and also to hold individual beads in position and stop them moving around.

Think about using spacer beads between bigger beads. select a color to tone or contrast, or simply neutral such as gold or silver.

You may knot the thread in between each and every bead. It can be quite effective to knot groups of beads along the thread.

For more info How To String A Necklace With Thread is an ideal project to familiarize yourself with traditional stringing using a needle and thread.

Based on the thread you’ve selected (see our which jewelry making thread guide) and on individual taste there are many ways to complete your homemade necklace.

Points to consider will be the thickness of the thread, the length of the actual item you’re making as well as the ease with which you’ll want to put on and take off your jewelry.

Waxed thread is a great combination with a clasp with loops, a bolt and ring or trigger clasp are amongst the most widely used. A calotte is then used to attach the thread to the clasp. The calotte covers unsightly knots and incorporates a loop onto which you may attach your clasp. To give your knot some extra body simply pass the end of the thread back through the knot another time.

Lay the knot inside the hollow of the calotte and squeeze it tightly closed. Trim the loose strands that stick out at the very top. Open the loop on the calotte and fix it to the clasp.

Beading wire can be unhappy when knotted. Use a small crimp, squeezed firmly with the half-round/flat nosed pliers. A crimp cover will improve the finish (see using a crimp bead above).

A leather cord necklace can be finished in many ways. Leather crimps combined with a hook are the most typical. There’s two basic kinds of leather crimp, round and flat.

For round crimps ensure a tight fit, double the cord if needed. Grip the end coil and squeeze gently but firmly with the half-round/flat- nosed pliers until the spring has tightened on the cord and is secure. It can help if you keep the end of the spring facing you. Squeeze the end coil only.

Attach a hook to one loop. This will attach to the loop on the opposite crimp.

For flat crimps fold the end of the cord double if it won’t fit comfortably and place it inside the crimp. Fold each side down in turn and squeeze tight with the half-round/ flat nosed pliers.

Add a hook to one crimp loop and a jump ring (split ring) to the other. A clasp can be substituted for the hook.

You might prefer to join the ends with a simple knot, a hook can be knotted to one side of the cord, catching on to a knotted loop or jump ring on the other.

A leather or cotton thong necklace can be finished using simple slip knots, enabling the necklace to be worn at various lengths.

Step2. Take the end of the leather that’s been curved to the right and pass it over then under the other piece of leather.

Loop it around and over itself then back through the loop you have just created. 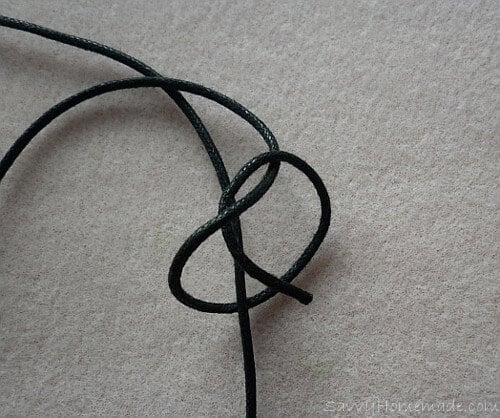 Pull the leather on both sides of the knot to tighten. 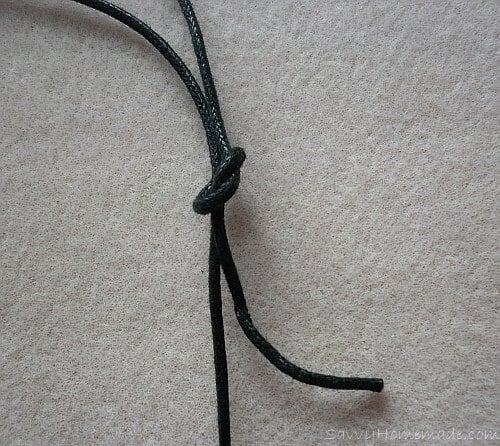 Repeat the process on the other side. 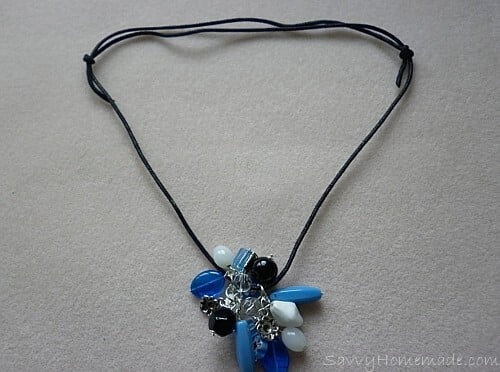 Now, let’s take a look at how to make this silver pendant necklace.

How To Make Silver Pendant Necklace.

I love making homemade jewelry and this stunning silver pendant necklace is one of my favorite necklaces; it can be adjusted to any length so it looks great with just about any outfit.

How To Make Homemade Earrings Inexpensively 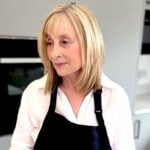 Hi, I'm Angela, and I make most of the homemade things here at Savvy Homemade. I’m fearlessly dedicated to creating tried, tested recipes & products that will work for everyone. I'm an experienced soap maker, skincare formulator, author, busy Mom of 3, and recently a Grandma! Welcome to SavvyHomemade, it's my true passion.
More from the author

With recipes to help you create a wonderful home facial routine for glowing skin.